Orioles Close In On Markakis

Share All sharing options for: Orioles Close In On Markakis 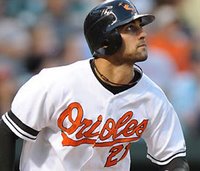 The Orioles and Nick Markakis are closing in on a six year extension worth 65 million dollars, the Baltimore Sun Reports. "We're close," MacPhail said, without revealing specifics. "But we're not there yet." The deal makes Markakis a free agent after 2014, buying out three years of free agency. Markakis hit .306 with 20 HR in 157 games, and is just 25. The Orioles also tried to lock up Brian Roberts, but may look to move him as teams grow more impatient with free agent Orlando Hudson.While the Nationals likely will not pursue Roberts, don't rule out the White Sox or Twins trying to make a move.