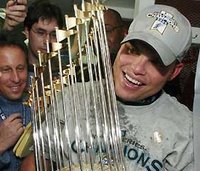 The Orioles are reportedly targeting free agent catcher Ivan Rodriguez to be their back up catcher. Rodriguez hit .295 with 5 HR in 82 games for the Tigers last season but hit just .219 in the tough AL East. However, he has a lot of knowledge of the game and would be the perfect mentor to a guy like Matt Wieters. Orioles GM Andy McPhail is familiar with Ivan Rodriguez having closely scouted him when the Cubs pursued him back in 2003. He spurned the Cubs to sign with the Tigers, but the Cubs have had success at the catcher spot over the past couple of seasons with Michael Barrett and Geovanny Soto, so there are probably no hard feelings.
The Orioles are also in the market for a first baseman, and are looking at free agents Richie Sexson, Kevin Millar, and Ty Wigginton. The Orioles have also inquired about Micah Hoffpauir and Daric Barton, among others.
This story was approved by MLB Rumors.