Share All sharing options for: Orioles To Acquire Hill? 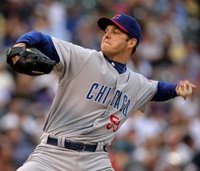 The Baltimore Sun is reporting that the Orioles are closing in on trade for Cubs pitcher Rich Hill. Hill, who is out of options, was once a top pitching prospect for the Cubs, but has failed to find the strike zone the past couple of seasons. Orioles new pitching coach Rick Kranitz is very familiar with Hill, having coached him in Triple-A with the Cubs. It will be interesting to see how Hill responds to a new opportunity. He has a lot of potential, but just could not command his pitches better.
The Cubs nearly acquired Brian Roberts last offseason but they backed out when the Orioles continued to hold out for Rich Hill. Hill will likely join former Cub Felix Pie, who the Orioles just acquired for Garrett Olson. In 2005, the Orioles held out for Pie in the trade that would have sent Erik Bedard and Miguel Tejada to Chicago (Mark Prior was involved as well). At the time, you could argue one way or the other about the trade. But if these players find success with their new teams, it is very possible that some Cubs executives will be held accountably.
This story was approved by MLB Rumors.