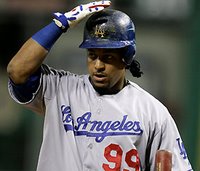 According to the Denver Post, the Giants are quietly making an aggressive play for free agent outfielder Manny Ramirez. While this could be a way for Scott Boras to start a bidding war, the Giants have expressed a desire to have a power hitter in their lineup. Ramirez hit .332 with 37 HR and 121 RBI in 153 games for the Red Sox and Dodgers last season, but owned a .396 average after joining the Dodgers. However, AT&T Park has a big outfield and Ramirez might have trouble patrolling it long term. They obviously know how to adjust to it having to deal with Barry Bonds for the past couple of years, but they might be better going after someone younger like Pat Burrell or Adam Dunn.
This story was approved by MLB Rumors.