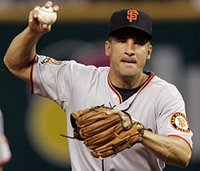 According to MLB.com, the Rangers have some interest in Omar Vizquel. The Rangers would like to use Vizquel as a utility player, but also as insurance in case Elvis Andrus needs time developing in the majors. He is going to be making the jump from Double-A, but the Rangers still feel that he will be able to produce immediately. He could struggle earlier on while he is figuring things out or he could blast on the scene because teams aren't familiar with him. Either way, Vizquel will make for a solid back up and an excellent mentor to Elvis Andrus.
Vizquel did struggle last season in 92 games, but finished his final 61-at bats hitting .344 and five extra base hits.
This story was approved by MLB Rumors.