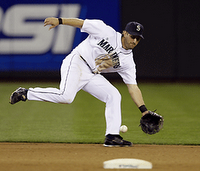 The Royals and free agent infielder Willie Bloomquist have agreed to a two year deal. Bloomquist, who hit .279 with 0 HR in 71 games, really is not the type of player the Royals needed. He did have a .377 OBP, but his career OBP is .322, so to say he is an on-base guy is way off base. He stole 14 bases last season, but isn't the type of player that is a guarantee steal off the bench.
The Royals have spent 11.4 million dollars on Kyle Farnsworth, Mike Jacobs, Horacio Ramirez, and Willie Bloomquist. Yes, the Royals needed a first baseman and bullpen help, but if they went out and signed Jason Giambi to a one year deal worth 4-5 million dollars, they still would have had money to pursue Farnsworth and probably Jacobs. Fans must be frustrated by the signings of low-impact players, but the Royals really are not in a position to be throwing away money.
This story was approved by MLB Rumors.