Share All sharing options for: Young Asks Rangers For Trade 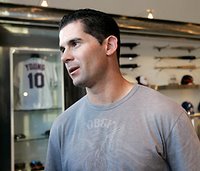 Texas Rangers shortstop Michael Young has asked the Rangers for a trade and gave them a small list of teams for for which he would waive his no trade clause to. Young, an All-Star in each of his five years at shortstop, won his first Gold Glove this year. You can see why Young wouldn't want to accept a move to third base. Third base is a hard position to adjust to, especially after playing your whole career at second and short. Why change something that has worked well for you and the team over the past five years? When Young signed his extension last season, he signed it thinking he was their shortstop. Obviously things can change, and maybe he's upset because the Rangers approached him the wrong way. The way I see it, if a minor league prospect can prove himself in the big leagues, a spot will open up naturally.

Rockies prospect Ian Stewart, who was asked to make the move from third to second, said he had trouble making the adjustment: "At third base, nearly every ball is hit hard. At second, most plays are pretty routine. I had trouble with getting around the ball, adjusting my feet, taking my time. It was something I just wasn't used to." We know that Young is very athletic and could probably make the transition, but his numbers could suffer as well as the teams performance.

Young will probably draw serious interest on the open market. He is entering the first year of a five year contract, where he will make sixteen million annually until 2013. It is possible the Red Sox would make a play for Young, but they have Jed Lowrie and Julio Lugo, and are in no position to take on a big contract like Young's. The Rangers would have to be overwhelmed to trade him away.