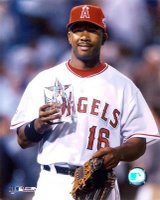 The Braves and Garrett Anderson have come to terms on a one year deal worth 2.5 million dollars. Anderson, who hit .293 with 15 HR in 145 games for the Angels last season, holds a .296 career batting average. Anderson is expected to platoon in left field with Matt Diaz, but he gives the Braves a contact hitter who seems to come through in clutch situations. "Last season, he hit .338 in 130-at bats with runners in scoring position, including a .356 with two outs. In the late innings or close games, he hit .371 with a .441 OBP in 89 at-bats. "
The Braves have always had the reputation of having a very close knit clubhouse. Adding someone with as much experience as Anderson can only help their younger players develop.
This story was approved by MLB Rumors.