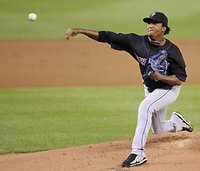 Free agent starter Pedro Martinez is hoping his performance during the WBC will land him a job with a major league club. The Pirates, Indians, and Dodgers all expressed interest in Martinez throughout the course of the offseason, but never made him an offer. Martinez was 5-6 with a 5.61 ERA in 20 games last season, and hasn't had a double-digit win season since 2005. At this point, it is tough to rule out anyone. Pirates pitching coach Joe Kerrigan worked with the Red Sox from 1997-2001, during Martinez's first couple years with the team. He also worked in New York with the Yankees, so he is probably very familiar with Martinez.
Martinez played for the Dodgers in 1992-1993, but the Dodgers might not have money to spend once they sign Manny Ramirez, assuming they get that deal done.
This story was approved by MLB Rumors.