Share All sharing options for: Options For Juan Cruz 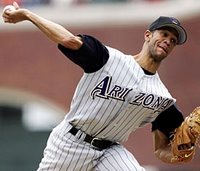 Free agent reliever Juan Cruz still cannot find work, and it doesn't look like any team is planning to make a move. Cruz is a Type-A free agent, meaning any team that signs him would lose a first round draft pick in the upcoming MLB Draft. Cruz went 4-0 with a 2.61 ERA in 57 games last season, and lead the league with 12.37 strikeouts-per-nine innings. This problem goes back to the compensation system, which has been under fire all offseason because teams are avoiding some low cost players like Cruz, Orlando Cabrera, and Orlando Hudson, all of whom are Type-A free agents.

One option for Cruz, brought up by Ken Rosenthal in a recent piece, is to sign with a Japanese team. Cruz would be one of the top relievers in Japan, and would probably close for any team that would sign him. He would expensive, but a team with a extra cash would really benefit from his services. After one year in Japan, he would be a free agent and could sign with an MLB team in 2010.