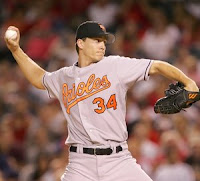 The Rangers and Kris Benson have agreed to a minor league deal with an invitation to big league camp. The Rangers view Benson as a possible bottom of the rotation starter, but he has a lot to prove if he wants that spot. The Rangers have been doing adding a lot of minor league free agents, like Casey Daigle, Jason Jennings, Doug Mathis, and top prospects Neftali Feliz and Derek Holland. While it doesn't look like any of these guys will have serious impacts on the Rangers 2009 campaign, they will give some of the Rangers' regular pitchers more time off to prepare for the regular season.
This story was approved by MLB Rumors.