A-Rod Tested Positive For Steriods in '03

Share All sharing options for: A-Rod Tested Positive For Steriods in '03 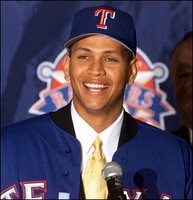 According to SI.com, citing independent sources, Yankees third baseman Alex Rodriguez reportedly tested positive for two types of anabolic steroids in 2003. Rodriguez, who hit .302 with 35 HR in 138 games last season, would not comment on the issue. Major League Baseball does not have a penalty in place for players who tested positive in 2003, the first year of testing.