Share All sharing options for: Rodriguez Admits Steroid Use 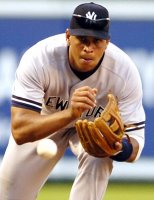 Yankees third baseman Alex Rodriguez admitted to using steriods from 2001-2003, according to FOXSports.com. "And I did take a banned substance and, you know, for that I'm very sorry and deeply regretful. And although it was the culture back then and Major League Baseball overall was very — I just feel that — you know, I'm just sorry. I'm sorry for that time. I'm sorry to fans. I'm sorry for my fans in Texas. It wasn't until then that I ever thought about substance of any kind, and since then I've proved to myself and to everyone that I don't need any of that." It will be interesting to see how Rodriguez is embraced by fans around baseball. He is 209 homeruns away from Barry Bonds' homerun record, and is just 33. If he were to hit 30 homeruns for the next seven seasons, he would have 763 homeruns.

Odds appear to be in Rodriguez's favor, who has averaged 41 homeruns over the past five seasons.