Jones To Opt Out Friday?

Share All sharing options for: Jones To Opt Out Friday? 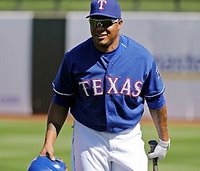 Rangers outfielder Andruw Jones can opt out of his minor league deal Friday if he is not on the Rangers 40-man roster. Jones is hitting .290 (9-for-31) with 1 HR. but hasn't played in a game since March 13th. The Rangers have a couple good young outfielders, meaning Jones would really have to turn some heads if he wants a shot to make the roster. But, Jones has hit .190 over the past two seasons, hitting just 3 homeruns last season.

Starting Jones in Triple-A is better for the Rangers. It leaves a spot open on the major league roster to give an opportunity to Greg Golson or Brandon Boggs, or someone at another position. It also lets them evaluate Andruw Jones to see if he is still a n effective major league ballplayer. I wouldn't be surprised to see Jones opt out and look for a job elsewhere.