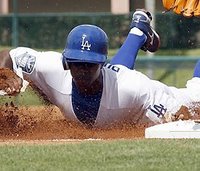 Dodgers outfielder Juan Pierre has requested a trade, Dodgers.com is reporting. The Dodgers granted that request by giving his agent permission to explore trade options. Pierre, who has 28.5 million dollars remaining on his contract, said he would be willing to defer a part of his contract to help facilitate a trade. Pierre is coming off his first season in five years where he did not play in every single game. In 281 games with the Dodgers, Pierre has hit .288 with 1 HR and 104 SB.
When Pierre left Chicago, many thought top prospect and now Orioles outfielder Felix Pie was going to replace him. In turns out that the Cubs could have used the leadoff hitter and the speedy center fielder, but don't expect them to pursue him. I doubt teams will make a serious play for Pierre at this point. While he is a solid player, teams are still giving their young players opportunities, and won't add payroll unless they absolutely have to.
This story was approved by MLB Rumors.