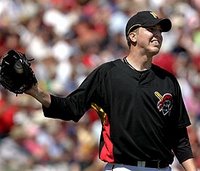 Pirates pitcher Tom Gorzelanny, who came into last season as the teams ace, will be heading to Triple-A Indianapolis. The Pirates are disappointed with Gorzelanny's progress in Spring Training, especially after going 6-9 with a 6.66 ERA last season. Gorzelanny has struggled with his command so far this Spring, giving up eight hits and five walks in just nine innings.

On the surface, Gorzelanny had a solid 2007 going 14-10 with a 3.60 ERA. However, he threw over 200 innings for the first time in his career and had a WHIP of 1.40. He was giving up a lot of hits and walked 68 batters. His command did not get better as the season went on either, making his 2007 season looking more like a fluke. It will be interesting to see if he can bounce back.
This story was approved by MLB Rumors.