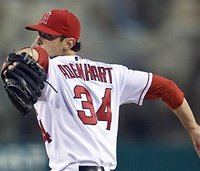 Angels starting pitcher Nick Adenhart was killed last night by a suspected drunk driver. Adenhart, 22, has been one of the teams top pitching prospect for the past several seasons. "It is a tragedy that will never be forgotten," he said at an Angel Stadium news conference. Adenhart's dad was even in town to see his son make his fourth career start. Adenhart pitched six scoreless innings, and was very happy with his performance after the game. "After the game, "he was so elated...he felt like a major league," agent Scott Boras said, weeping.
Adenhart was 37-28 with 3.88 ERA in 91 minor league games, and has one major league win. My heart goes out to his family, the Angels organization, and anyone else affected by this tragedy.
This story was approved by MLB Rumors.