Share All sharing options for: Angels To Pursue Martinez? 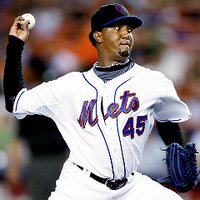 The Angels could be in serious trouble if they do not add a pitcher. The sudden death of Nick Adenhart on Thursday shocked the Angels, not to mention putting a hole at the bottom of their rotation. With Lackey, Escobar, and Santana on the DL, the Angels have Jered Weaver and Joe Saunders leading their rotation. Dustin Mosely and Shane Loux follow, making for a pretty mediocre rotation.
The Angels expect Lackey, Escobar, and Santana to be out till late May, so adding a veteran like Pedro Martinez to come in and loosen up the clubhouse could help the team morale. Martinez refuses to back off his contract demands, so the Angels may look elsewhere. But, Martinez has a 5-1 record with a 2.83 ERA in 9 career games at Angels Stadium.
This story was approved by MLB Rumors.