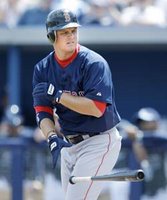 Red Sox outfielder Brad Wilkerson has retired. Wilkerson, currently with the Triple-A Red Sox, told his manager after the second game of the season. He was a .247 career hitter with 122 homeruns. He played for the Expos, Nationals, Rangers, Mariners, and Blue Jays in eight major league seasons.
This story was approved by MLB Rumors.