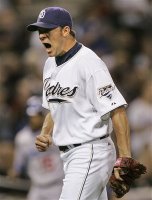 The Chicago Tribune is reporting that the Brewers could target Jake Peavy to make a serious run at the division. It seems far-fetched considering the Brewers traded four prospects, including top prospect Matt LaPorta. However, the Brewers have a young core of talent and could make a trade without hurting themselves too much.
If the Brewers were to trade J.J. Hardy (opening up a spot for Alcides Escobar), along with someone like Cole Gillespie and two pitching prospects, they could probably land Peavy. If they let Mike Cameron walk, they will probably receive a compensation pick in the 2010 draft. Not only that, but Prince Fielder and Corey Hart could both be traded for prospects if needed. Mat Gamel has great potential and could take over at first while Lorenzo Cain could take over in right at some point in the near future.
More importantly, this move would give the Brewers a push that would put them in serious contention in the NL Central. While they lose several players, the minor league talent the Cubs and Cardinals possess really doesn't present a serious long term threat. Adding Peavy to that strong offensive team presents a legitimate threat to the heavily favored Cubs, who also plan to target Peavy when their ownership situation is resolved.
This story was approved by MLB Rumors.