Share All sharing options for: Bullpen is Hurting Marlins 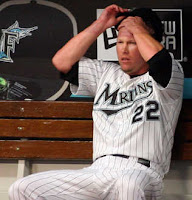 The Marlins are off to a great start with an 11-7 record, and some are starting to think that the Marlins have what it takes to win that division. Not so fast.

The Marlins bullpen has already blown three saves, and have an ERA of 5.19 (second worst in NL) in 17 games. Matt Lindstrom has a 1o.80 ERA in seven games, with just three saves in five attempts. Leo Nunez, who was acquired from the Royals in the Mike Jacobs trade, has a blown save but has a 4.32 ERA in eight games. Lindstrom has an explosive fastball, but he is not mixing it well with his other pitches. He has left his fastball over the plate too much, and it is starting to get hit. Marlins fans can't complain about trading Kevin Gregg either, the prospect they got for him, Jose Ceda, is a big powerful right handed reliever who could be join the Marlins this season if necessary. It is still early, and the Marlins expect Lindstrom to heat up. He had a 3.14 ERA last season, but had a WHIP of 1.45.

The Marlins have four quality starters who have combined to go 6-3 so far this season. The Marlins are on a six game losing streak, but beat the Mets, Braves, and Nationals in series play. It is way too early to say the Marlins should go out and get a closer, but Lindstrom has been a set up man the past two seasons and may not be suited in the closer role. "Stuff-wise, he's got it. The big arm, 96 miles per hour. His breaking pitch is being developed to be an above-average pitch. His two-seamer is working. Now he needs to develop the other stuff that comes with winning games.''

One possible option could be Red Sox prospect Daniel Bard. He is closing in Triple-A and has really impressed the Red Sox, going 1-0 with a 1.69 ERA and K-BB ratio of 18-3. The Red Sox could look to acquire Mike Stanton, Gaby Sanchez, or Sean West if they were to make Bard available.