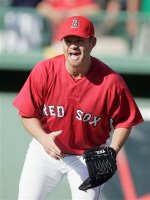 Free agent pitcher Paul Byrd is reportedly interested in joining the Angels, the LA Times is reporting. The report goes on to say that the Angels do not have much interest in signing Byrd, mostly because they are not looking to add money to their payroll. "My agent talked to them pretty recently . . . but they're not spending money, and they say they're going to stay in-house," Byrd said by phone. "They have [John] Lackey and [Ervin]Santana coming back, [Kelvim] Escobar. They want to see what their young guys can do. I take no offense."
The Angels opted to go with Anthony Ortega for the time being, and may look to trade for a pitcher before going out to the market. You can probably rule out the Angels for Pedro Martinez, who sources say, is expected to sign within the next two weeks.
This story was approved by MLB Rumors.