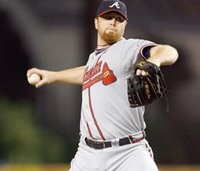 Two days after being designated for assignment, Braves pitcher Blaine Boyer was traded to the Cardinals for minor league outfielder Brian Barton. In 82 games last season, Barton hit .268 with 2 HR and a .354 OBP. Barton has a .309 career minor league average, but never hit for much power. He stole around 20 bases in the minor leagues, but hasn't been given the at-bats to get on base and run.

Boyer has given up six earned runs in 1.1 innings, and has a 5.46 ERA in 129 major league games. Cardinals pitching coach Dave Duncan has a history of turning around struggling pitchers. If he and Boyer can connect, Boyer could put up a decent year in middle relief.