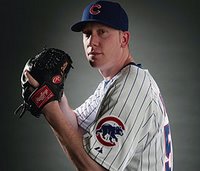 After a spring where nothing went his way, Chad Gaudin was given his release from the Chicago Cubs. Gaudin, who had a 6.26 ERA in 24 games for the Cubs, gave up 19 earned runs in 16.1 innings pitched. He is 25, so he will probably get picked up really soon. The Rockies, Orioles, and Padres could all look into adding him. The move allows the Cubs to keep Rule 5 pick David Patton, who was taken from the Rockies in December. The Cubs also optioned Jeff Samardzija to Triple-A, allowing them to keep Angel Guzman as well. Guzman is coming off a pretty rough spring having given up 10 earned runs in 12.1 innings pitched. However, Guzman, 27, had loads of potential when he is younger and the Cubs want to see if he that talent is still there as a reliever.
Sending Samardzija to Triple-A takes nothing away from the fact that he had a terrific spring. He has what it takes to pitch at the next level, it's just that the Cubs just want him to be able to start regularly and get comfortable before they need him full time. I think it is smart move that will pay off for Samardzija and the Cubs in the long run.
This story was approved by MLB Rumors.