Hurdle On The Hot Seat?

Share All sharing options for: Hurdle On The Hot Seat? 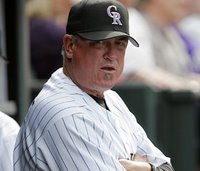 In Ken Rosenthal's latest installment of the Full Count, he mentions the struggling Rockies manager Clint Hurdle's likeliness of being fired. The Rockies are 6-11 this season - second worst in the National League - and could fire Hurdle, who is in the last year of his contract.
It is still early, so I doubt anything happens just yet. Not only that, but Hurdle is thought of well among the players, and he has a good relationship with GM Dan O'Dowd. But if the Rockies don't start hitting by the end of next month, Hurdle's job could be up in the air.
This story was approved by MLB Rumors.