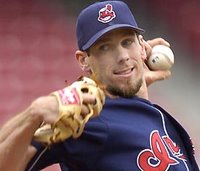 The Indians may look to shop struggling starter Cliff Lee if he cannot return to 2008 form. Lee, who went 22-3 with a 2.54 ERA last season, is 1-3 with a 5.25 ERA in three games. The Indians have an eight million dollar club option for next season, and may look to trade him to spend that money elsewhere. I think an eight million dollar option on a former Cy Young winner is the type of player you hold on to, especially because their starting rotation is not very strong.

However, if a team comes in and can offer a solid prospect or two and is willing to take on some of the money, it might be hard to pass up. The Diamondbacks, Phillies, and Dodgers could all pursue Lee if he were to become available.