Share All sharing options for: Interview with Tyler Colvin 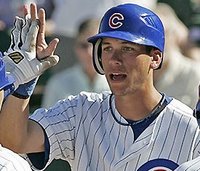 Today I had the privilege to interview Cubs prospect Tyler Colvin, who is currently playing for the Single-A Daytona Cubs. Colvin was taken by the Cubs in the first round of the 2006 MLB draft, played for Team USA, and is now on the comeback from Tommy John Surgery. The Cubs still have high hopes for the left handed outfielder, who is currently hitting .311 with 1 HR in 45 at-bats.

ELI: You had Tommy John surgery last year. What types of rehab have you been doing to get back into playing shape?

TYLER: I've had to do a lot of forearm exercises, throwing programs, basically just trying to get my arm strength back.

ELI: What was it like throwing for the first time after surgery? Were you nervous?

TYLER: No, I was more excited. My first throw went into the ground, but we sort of expected that. Some pitchers come back and are afraid to throw the ball. You just can't be afraid.

ELI: You are off to a good start this season, what did you work on over the offseason that you attribute to your strong start.

TYLER: My approach at the plate. I never had much of an approach, but I worked at it over the offseason. Now I go to the plate waiting for my pitch usually with a goal in mind.

ELI: What was it like playing for Team USA?

TYLER: It was an awesome experience. I got to go to Taiwan and play with guys, most of whom are in the big leagues. We played great baseball, good offense and defense, and we won a gold medal.

ELI: You were drafted in 2006, what was going through your mind as the draft neared?

TYLER: I actually wasn't thinking about it that much. I was more focused on getting to the College World Series with Clemson.

ELI: Players drafted out of high school often sign with a club rather than go to college. What about your time in Clemson made you a better player?

TYLER: Yeah, it taught me not to be selfish. We win as a team and we lose as team.

ELI: You jumped from college to Low-A Boise. What was the biggest change you noticed?

TYLER: Probably the wooden bats. I had one summer of wooden bats my freshman year, but it wasn't too bad of an adjustment.

ELI: Do you have any goals that you have set for yourself this season?

TYLER: Hopefully I can have consistent at-bats. I play hard, I like to think I can hit for power, track down a ball in the outfield. I just want to put together a strong season and go from there.