Share All sharing options for: Manny Wants to Play In Cleveland Again 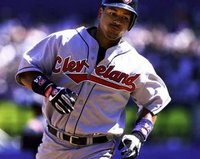 Manny Ramirez told USA Today that he would like to play for the Indians before his career is over."I would like to play for Cleveland one more time, to go back where I started," said Ramirez. While this is sort of bad timing on Ramirez's part, you have to understand where he is coming from. Ken Griffey Jr. and Jason Giambi received very nice receptions at their respective homes openers, both saying they made the right decision. "I think to go back where you started is everyone's dream," Ramirez said.
Ramirez's words are often misconstrued because of the circus that follows him, but these are obviously genuine feelings. A friend of mine sent me a link to another website with this headline-"Manny Ramirez to Cleveland?"-which was linked to the USA Today article.
This story was approved by MLB Rumors.