Share All sharing options for: Mets, Others Consider Martinez 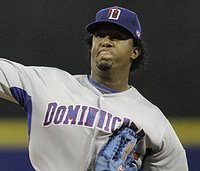 With teams pitching rotations starting to take hits, the Pedro Martinez race is slowly heating up. At this point, teams are not going to pay Martinez 5 million dollars to pitch. Martinez was 5-6 with a 5.61 ERA in 20 games last season for the Mets, but averaged a little over five innings per start. The Rangers and Nationals are both in desperate need of a starting pitching, but are in no position to add that kind of money. One agent, who asked for anonymity on the matter, thinks the Nationals could target Paul Byrd for the time being and hope they can sign Stephen Strasburg soon after the draft.
Martinez does not have the stamina and not the same zip on his fastball that he once had, not to mention he hasn't made 30 starts in three seasons. He will probably have to settle for a one year deal worth 2-3 million dollars, plus incentives that could bring it to five million dollars. The Angels and Dodgers are out of the mix, and small market teams are not looking to add payroll right now, so he might be out of luck.
This story was approved by MLB Rumors.