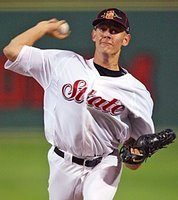 San Diego State's pitcher Stephen Strasburg was nearly spectacular last night against Texas Christian University, improving his record to 9-0 in 10 starts, and has allowed 13 walks while striking out 135 in 70.1 innings.
I wonder if the Nationals could follow in the Detroit Lions footsteps and lock up Starsburg before the draft, like the Lions did with Matthew Strafford. That way he could be in the minor leagues in early June and assuming all goes well, join the Nationals before the All-Star Break.
This story was approved by MLB Rumors.