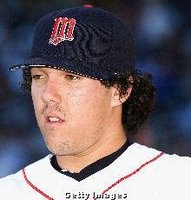 Twins first baseman Henry Sanchez, the 39th overall pick in the 2005 draft, has been suspended for 50 games for violating the Minor League Drug Prevention and Treatment Program. Since 2005, Sanchez has not shown the Twins much of anything. He has hit just .210 with 8 HR in 343 career at-bats.
When he was drafted, scouts had mixed reviews of Sanchez. Some thought he had the best power in the draft and could hit 30-40 homeruns in the big leagues. However, some thought he could be quality major league just as easily as a bust in Single-A. Sanchez hasn't taken the best care of himself, reaching 300 pounds in recent years, but he has decent range. I wouldn't be surprised to see the Twins release him at the end of the season, if not sooner.
This story was approved by MLB Rumors.