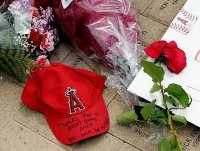 What started as a nice start to another baseball season, we were blindsided with the news that Angels pitcher Nick Adenhart was killed in an automobile accident. Off to a promising start with a six inning shutout performance, the top pitching prospect looked to be blossoming into a true major leaguer. The news of his death was a tragedy, not to mention the three other lives that were taken as well. The Angels, already with their three top pitchers on the DL, are now forced to find a replacement. The Angels held a very nice ceremony for the victims before Saturday's game, and were able to beat the Red Sox in his honor. On a lighter note, there were several young players who had nice weeks, and teams are looking to these guys to build off their strong starts.
Jordan Schafer, Braves: .348 AVG, 2 HR, .423 OBP.
- Schafer has put up great numbers at the plate and has shown off his speed in the outfield.
Emilio Bonifacio, Marlins: .500 AVG, 1 HR, .517 OBP, 4 SB.
- Bonifacio is off to a great start at third for the Marlins. The talent has always been there, it's poor consistency that has been the problem.
Adam Lind, Blue Jays: .400 AVG, 3 HR, 12 RBI, .419 OBP.
- Entering his third major league season, Lind has taken big strides at the plate. He could play a big role in the Blue Jays playoff hopes this season.
Jeremy Guthrie, Orioles: 2-0 W-L, 2.25 ERA, 5 K, 12 H.
- Guthrie has been an Orioles project for the past three seasons, and he might be putting his stuff together. He did put up 10 wins last season, and is off to a good start this year.
Josh Johnson, Marlins: 2-0 W-L, 0.57 ERA, 1 ER, 15 SO.
- Johnson is a big, hard throwing right hander who combines his fastball with a hard slider. He was able to beat Johan Santana today, and is hoping to lead that young rotation.
Here are some other young players whose first week is something they would like to forget:
John Lannan, Nationals: 0-2 W-L, 10.00 ERA, 10 ER, 3 BB, 9 IP.
- The Nationals hope Lannan can breakout for the Nationals after putting up 10 wins last season, but he hasn't been able to command his fastball early on.
Scott Olsen, Nationals: 0-2 W-L, 14.63 ERA, 8 IP, 13 ER, 2 HR, 6 BB.
- The Nationals hoped that when they traded for Olsen, he would emerge into a solid top of the rotation starter to lead the Nationals. So far, that hasn't been the case.
Chris Davis, Rangers: .045 AVG, 1 H (22 AB), 0 HR, 0 RBI, 10 SO.
- There is a lot of pressure on Davis to put up big numbers after having a breakout 2008 campaign. So far he has struggled mightily and the Rangers could be scrambling if Davis doesn't pick it up.
Injuries
Brandon Webb, Diamondbacks: 15-day DL, shoulder tightness.
Doug Brocail, Astros: 15-day DL, strained rotator cuff.
Rumors
After Cole Hamels struggled through his first outing, several believe that he is showing the effects of an overworked pitching from last season. Hamels told the Philadelphia Inquirer that he is "fine now."
The Angels may be forced to add another pitcher with Escobar, Lackey, and Santana on the DL. Pedro Martinez is available. The LA Times mentions Anthony Ortega and Darren Oliver asi in-house possibilities.
Dodgers outfielder Delwyn Young is out of options, and several scouts have been watching him during his rehab assignment. The Indians, Pirates, and Phillies are interested.
Minor League Update
Juan Miranda, Yankees (AAA): .474 AVG, 2 HR, 11 RBI.
- The Yankees won't hesitate to recall Miranda if Teixeira goes down for an extended amount of time.
Matt LaPorta, Indians (AAA): .625 AVG, 1 HR, 1 SO, .667 OBP.
- LaPorta could be playing for the Indians very soon if he continue to swing a big bat.
Tyler Flowers, White Sox (AA): .417 AVG, 1 HR, 2 RBI, .500 OBP
- Flowers is the young power hitter the White Sox hope can fill the shoes of Jim Thome or Jermaine Dye when there time with the team runs out. So far he is looking really good.
David Price, Rays (AAA): 0-0 W-L, 4.91 ERA, 4 SO, 3.2 IP.
- Price will be pitching for the Rays at the major league level really soon. Once he gets comfortable and into more of a routine will the Rays give him the opportunity.
What to look for next week...
Interviews will start to be scheduled next week.
Rich Harden, who is coming off a solid 10 strikeout performance, will be making his second start of the season. Some think that Harden is already DL bound, so it will be interesting to see if he can string together back to back strong outings.
The Pirates, Cubs, Nationals, Rays, Dodgers, and Mets all have their home openers.
Tigers pitcher Rick Porcello will make his second start of the season.
This story was approved by MLB Rumors.