Angels Close In On Seanez

Share All sharing options for: Angels Close In On Seanez 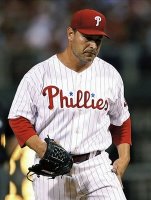 Right handed pitcher Rudy Seanez is closing in on a minor league deal with the Angels. Seanez, who would be joining his 12th organization in 17 seasons, had a 3.53 ERA last season with the Phillies. Seanez has a 4.10 career ERA, and the Angels hope the 40-year-old can have an impact on the bullpen, which owns a league worst 6.90 ERA.