Braves Have Chips For Big Trade

Share All sharing options for: Braves Have Chips For Big Trade 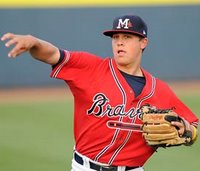 The Braves are off to a 16-16 start and they seemed poised to make a trade soon. Garrett Anderson and Jordan Schafer both are not hitting, and it would make sense that they would go after a power hitting corner outfielder. The Braves top three starters are solid, and the rotation will get deeper when top prospect Tommy Hanson arrives in Atlanta. They are just 1.5 games out of first, and the pitching has proven resilient, being in the top ten in ERA, saves, and strikeouts.

When it appeared that the Braves minor league system had all but dried up, some of their forgotten young arms have started to put it together. Kris Medlen has a 0.96 ERA and 5 wins while Charlie Morton is 3-2 with a 3.44 ERA in six starts. Morton is racking up strikeouts with great consistency, striking out at least ten in two of his six starts. The Braves have already said that Jason Heyward and Tommy Hanson are untouchable, but don't be surprised to see Jo-Jo Reyes shopped around. A package that included Reyes and Morton, along with a low level hitting prospect, could probably land them the hitter they need to challenge the rest of the NL East for the division.

Matt Holliday seems to be an obvious target, but the Athletics would ask for Heyward or Hanson in a package, and the Braves shouldn't make either trade. Hanson has been nothing but dominant since the end of last year and Heyward has scouts raving about his potential. Heyward projects well as a power hitter, and will likely grow into his 6'4'' frame. Brad Hawpe of the Rockies would be a nice option. He is hitting .330 with 4 homeruns, and won't be a free agent until after 2010 (club option for 2011). Hawpe is hitting .306 on the road, compared to .359 at home. The package mentioned above might be able to pull of this trade. Other options include Hank Blalock, Ryan Ludwick, and Brian Giles.