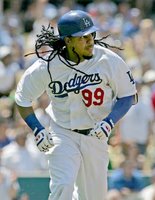 Dodgers outfielder Manny Ramirez has tested positive for using performance-enhancing drugs and will be suspended for 50 games. Ramirez, who is hitting .348 with 6 HR, will not be eligible to return until July 3rd. This is going to hurt the Dodgers and the players whose numbers were improved by Ramirez's presence in the lineup.

HOW DOES IT IMPACT...?
The Dodgers: The Dodgers have called up Xavier Paul who will likely platoon with Juan Pierre. Manny had an impact on the players around him, and his absence could have a big impact on guys like Andre Ethier, who has hit .357 with 15 homeruns since Manny became a Dodger. Ethier hit just .283 in the first half of the season, and Manny's presence in the lineup elevated Ethier's game to a whole new level.
Manny Ramirez: After hearing that the drug was HCG, a drug popular among steroid users, you knew something was up.
"HCG is popular among steroid users because it can mitigate the side effects of ending a cycle of the drugs," a source told the AP.
It wasn't like he got bad advise in the case of J.C. Romero, but it appears as if Manny knowingly took steroids. This certainly puts an asterix above his numbers in the eyes of several Hall of Fame voters, like it has for Mark McGuire. The Dodgers just named a section in left field called "Mannywood," and that could take a big hit from the new allegations. Guys have survived from being exposed for steroid abuse. Magglio Ordonez is still putting up good numbers in Detroit, Brian Roberts signed an extension in Baltimore, and Gary Sheffield hit his 500th homerun with the Mets. He will come back from this, and we'll see if he can come back for the second of the season and carry the Dodgers into the postseason.
Baseball: The list of 104 names continues to be exposed, and the past fifteen to twenty years are starting to take to the "Steroid Era" pretty nicely. Of course, we need to wait for all the details to come out before we can make our final judgements, but his chances for the Hall of Fame may have slipped away, like it has for so many other players.
This story was approved by MLB Rumors.