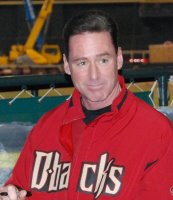 The Diamondbacks have gotten off to a rough start, and are 8 1/2 games behind the NL West leading Dodgers. The team president, Derrick Hall, called the teams play "unnacceptable," so a shakeup was inevitable. Today the Diamondbacks announced that they are firing manager Bob Melvin. Melvin, who was 337-340 since 2005 with the team, was named NL Manager of the Year in 2007. The Diamondbacks have yet to announce a replacement.

Kirk Gibson is the teams bench coach, and he is a possibility to replace Melvin on an interim basis. He has never been a manager but he has been a bench coach in Detroit and a TV analyst, not to mention a 17-year veteran with two rings to boast. From the outside, they could talk to Bob Brenly, currently the Cubs color commentator. He was their former manager, and they could turn to him because he brought them a World Series and handled the media very well. Who from the outside could adjust quickly enough to take the reigns of the struggling Diamondbacks?