Share All sharing options for: Diamondbacks Appoint Hinch As Manager 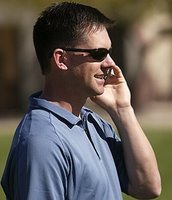 In a rather surprising move, the Diamondbacks have named A.J. Hinch, currently their farm director, as their new manager. Hinch, a former major league catcher, has no managerial experience. However, he has overseen the development of Justin Upton, Mark Reynolds, Stephen Drew, and others, so you could say he knows the Diamondbacks roster better than anyone. I, like others, viewed Hinch as an soon-to-be GM, like another Front Office executive with the Dbacks, Paul Woodfork.

Hinch will have to find a new hitting and pitching coach, and it will be interesting to see who he goes after.