Share All sharing options for: Gagne Signs With Canadian Team 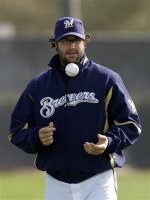 Free agent pitcher Eric Gagne has signed with the Quebec Capitales of the Independent Can-Am League, SI.com is reporting. Gagne, who has worked almost exclusively as a reliever, will start for the Capitales, the team confirmed Wednesday. Gagne, 33, is a former NL Cy Young award winner with the Dodgers, but struggled once he left. He pitched for the Rangers, Red Sox, and Brewers, but was released on March 8th.