Share All sharing options for: Guzman Emerging As Reliever 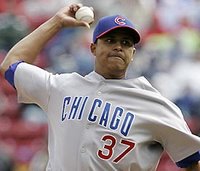 Once considered a top prospect in the Cubs organization, Angel Guzman is starting to emerge as a solid reliever in the Cubs bullpen. Guzman was dominant in his first couple years in the minor leagues, but was forgotten after the 2003 season when he went down with a shoulder injury. It took him nearly three years to make it back, and when he did, his stuff was not nearly the same.

Yet, the Cubs were not ready to give up on the prized prospect. They used him in the rotation, but he was unsuccessful. He was 0-6 in 2006 with a 7.39 ERA, but he recorded more than a strikeout per inning.

It took him nearly three years to record a major league win, but on April 18th of this year he logged it in an extra inning victory. Guzman had to earn the role he is in now, mostly because of an awful spring performance. Now he is the seventh inning man in front of Carlos Marmol, with a 3.32 ERA with 19 strike outs in 19 innings. Hitters are hitting just .179 against him with a WHIP of 0.95. While he likely isn't a fantasy option just yet, Guzman is starting to earn the trust of manager Lou Piniella and he will likely see more time in those pressure situations.