Share All sharing options for: Indians Could Shop Pavano, DeRosa - Not Lee 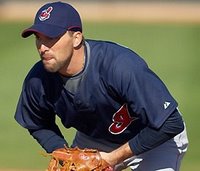 The New York Post suggests that the Indians would likely shop Carl Pavano or Mark DeRosa before they consider trading Cliff Lee. Both Pavano and DeRosa are in walk years and have bargain contracts, making them attractive to teams who may not have unlimited money to spend. DeRosa is able to play first, second, third, and the corner outfield spots, and can be slotted in several different spots in the lineup. He is a team player who emerged as a team leader in the Cubs clubhouse in just two seasons before he was traded for three prospects.

The Giants could be a possible landing spot for DeRosa. He could fill in all across the infield as well as platoon in left with Fred Lewis. Not only that, but if they let DeRosa walk, they could land a draft pick in the 2010 draft. As for Pavano, he could be an option for the Marlins, who have already been linked to Brad Penny. But Pavano has a 6.33 ERA in 8 starts, and probably doesn't have much value.

The Indians would be smart to wait to shop Lee until after the season. This gives them the opportunity to scout young prospects, some of whom who may get an opportunity to play for their parent club. Not only that, but teams may be more willing to trade than sign a free agent, making him much more appealing. He will make 8 million dollars in 2010, a very modest contract for an ace.