Share All sharing options for: Interview with Jorge Arangure 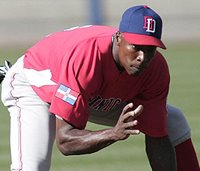 A couple weeks ago, ESPN.com article caught my eye about some of the top international prospects in this years pool. The article was written by Jorge Arangure, and I was curious to find out more about the process. It is a lot different than the MLB Draft. In the draft, teams can select anyone from the U.S., Canada, or Puerto Rico. Following the draft, the team has until August 15th to sign the player and then assign him to one of the minor league teams. In the international pool, the process varies depending on the player and the team. So I emailed Arangure and asked him if he would be up for answering some of my questions. He was more than happy to and I appreciate his informative responses.

ELI: Is there an age a player has to be before he can be scouted by MLB teams?

JORGE: There is no particular age when a team can simply scout a player. Often, diligent scouts will know about a particular player years before they are eligible to sign. It's not uncommon for a scout to have seen a player when they were as young as 12 or 13. For example, this January, powerful trainer Edgar Mercedes had a showcase for several of his top prospects which was attended by scouts from almost every team. Among those prospects was Wagner Mateo, who is considered one of the top outfielder's in this year's free agent class. But also working out were several players who weren't eligible until 2010 and there were even a couple players working out who won't be eligible to sign until 2011. The distinction of course is that teams aren't supposed to even negotiate for those players at this point.

ELI: In some scouting videos, you'll see the same prospect wearing different uniforms. How much contact can teams have with players leading up to the international signing date when they are available?

JORGE: Really, there are no limits on how much contact a team can have with a player. The only limit lies in how much time a prospect can spend at a particular team's academy. MLB dictates that a prospect can spend a maximum 30 days housed at the academy. But that doesn't rule out that a player can basically work out for the team as much as he wants while not housed there.

ELI: Today, news travels pretty quickly. How connected are the different cities and towns when it comes to baseball. When there is touted prospect somewhere in the D.R. (for example), how do people usually hear about him and how long does it take before he is being talked about here?

JORGE: This is a bit complicated. Usually Dominican trainers will know about a particular prospect much earlier than teams do. Because trainers can sign a contract to represent a player at any age, they have an advantage over teams, who can't sign a player until they are 16. It's very rare these days for a top prospect to not be a linked with a well-known trainer (aka buscon). Trainers have their own scouts looking for players. And also, you'll get a low level trainer with a top prospect who simply sells or agrees to split the bonus commission with a more well-known trainer so the prospect gets more exposure. The more well known trainers can get teams to attend workouts simply because they have produced top players in the past.
Of course there are always exceptions. Many players who get small bonuses often blossom later because no one really can predict how 16 year old kids will develop.
ELI: After the international signing begins, how long does the team have to sign players?
JORGE: There is no time limit on when a team can sign a player. Once a player become a free agent he can sign with whichever team he wants whenever he wants. A player becomes eligible to sign in a certain year if he turns 16 in that year prior to Sept. 1. If he turns 16 after Sept. 1, then he won't be eligible to sign until July 2 of the following year. For example, if Player X turns 16 on May 12, then he can sign this year on July 2. But if he turns 16 on Sept. 12, then he must wait until July 2, 2010.

ELI: After a player is signed, what are the next steps for the player? Where is he assigned?
JORGE: Usually, 16-year-old kids signees will spend at least one season in the Dominican Summer League. Kids that young usually aren't deemed physically or mentally ready to travel to the United States to play against high school and college graduates. That isn't always the case if a player is signed when he's 18 or older. Then a team may deem the player ready to start his pro career in the US.
ELI: Who would you say is the top hitting prospect and pitching prospect in this years pool?
JORGE: The market is shaping up to be that SS Miguel Angel Sano and P Daniel Sanchez are the top hitters and pitchers this year. Sano is a Dominican power hitting shortstop with a strong body that makes likely that he'll end up playing another position at one point. Teams love his raw power and he has a strong arm, which means he could end up playing third base. Sanchez is a right-handed hard-thrower from Venezuela. He has an above average fastball and some teams think he will eventually develop a good slider.
ELI: What teams are most active in scouting players? What team, if there is one, the least active?
JORGE: It's hard to say which teams are more or less active than others simply because some teams choose to bypass paying the big bucks for the big name players and instead focus on cheaper players who they project can be successful major leaguers. I'd say the most active players on the big names this year are Texas, the Yankees, the Pirates, San Diego, the Dodgers, the Mets, among others. Every team is active in some way. Some just choose to be a bit more clandestine about which players they scout.
ELI: Is there was a way to improve the process? More media access to players, something in the regulations, etc. If there was something you could change, what would it be?
JORGE: If I could change something I'd say i would make it so that players aren't eligible to sign until they are 18. For me this would eliminate some of the age manipulation.