Share All sharing options for: Interview with Tanner Scheppers 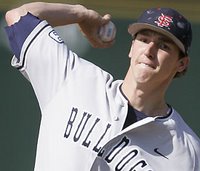 For those of you who don't know Tanner Scheppers, it will only be a matter of time before you do. Scheppers was taken in last years draft by the Pittsburgh Pirates, but chose not to sign. His draft stock took a huge hit when he suffered a stress fracture just weeks before the draft. He has been rehabbing since and is now playing again for the St. Paul Saints of the Independent leagues. In two games this season, Scheppers has a 1.00 ERA with 9 strike outs and 6 walks. He projects well as front of the line starter, but is a few years away from contributing at the big league level. Scheppers was nice enough to give Eli's MLB Rumors 10 minutes of his time last week, and I appreciate every minute of it. Enjoy!


ELI: It had been awhile since your last start. What was it like getting back on the mound for the first time?

TANNER: It was great. It was nice to get back on the mound again.

ELI: What was working for you in that start?

TANNER: My fastball was there. I had controlled stuff, it was good.

ELI: You had a long road back to the mound, what sort of preparation did you have for this season?

TANNER: You know, I worked hard. I thought I prepared myself well. I just had to get myself into the right mindset.

ELI: Can you tell me a little bit about your recovery from the stress fracture in your throwing shoulder?

TANNER: Yeah, I did a lot of stretching at the Sports Medicine Institute. For four months, an hour and half each day of running, stretching, and light weights.

ELI: You are going through the draft for the second time now. Do you feel the first experience has prepared you better for this time around?

TANNER: Yeah, definitely. The biggest thing is that this time around I know what not to think about.

ELI: The Pirates have the fourth overall pick in this years draft. Would you have a problem with them drafting you again?