A Jake Peavy Exclusive Part I

Share All sharing options for: A Jake Peavy Exclusive Part I 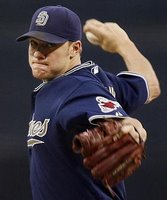 Last Wednesday, I went to cover the Padres/Cubs game and had a sit down interview with Padres ace Jake Peavy. Coming to Chicago - a place where he was nearly traded to last offseason - everyone was curious to see how he would handle the pressure. Peavy gave up three earned runs his starts against the Cubs, striking out nine and walking two. Despite suffering the loss, he was happy to give Eli's MLB Rumors an exclusive interview.

In 2006, Peavy battled midseason shoulder tendonitis, something that was attributed to pitching in the WBC. Players since, including All-Stars Geovanny Soto and Joakim Soria, have had to battle back from injuries early on because of their increased workloads during the WBC.

"It is certainly hard to get going," Peavy said. "It is hard to get it going that early and being able to do what you know you are capable of doing. I think right now, us as Americans would have a lot better chance of competing and winning it all."

Teams may not like seeing their star players skip Spring Training, but players enjoy teaming up with guys they usually would not play with.

"No doubt about it, you play with a lot of great players. You get to know people you don't have the opportunity to get to know or play with for any set period of time - other than an All-Star game or something - so that is certainly a fun part about it."

Peavy, a two-year veteran of the WBC, would be open for a change to the scheduling, moving it to November rather than before Spring Training.

Part II coming out tomorrow!
This story was approved by MLB Rumors.