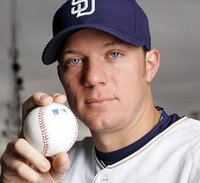 To see Part I of the interview, click here.

The MLB Draft is always an interesting event to follow because you cannot fully judge a team by the moves they make until you see how the player perform at the next level. A team will take a player based on his talent and potential growth, but has no control over how he performs at the next level. They can influence him, but if the player can't handle it than it throws off his entire development. In the 1999 draft, the Padres were excited about their three first-round picks: Vince Faison, Gerik Baxter, and Omar Ortiz. Little did they know that their fifteenth round pick would turn out to be a future Cy Young award winner named Jake Peavy. Faison and Ortiz never made it to the major leagues, and the Padres never had a chance to see what Baxter was truly capable of, as he was killed in an automobile accident in 2001.

It was June 1999 and high school senior Jake Peavy was sitting on an offer to play baseball at the University of Auburn in his home state of Alabama. The Padres liked Peavy's competitive nature and love for the game, so they drafted him in the fifteenth round From there, it was up to Peavy, who could decide to go pro or to Auburn and reenter the draft as a junior in 2002.

"We just weighed our options," Peavy said. "At the end of the day we came to the realization that I wanted to be a major league baseball player. Why not get in the system as an 18-year old kid and start developing towards becoming a major leaguer."
While current big leaguers Gabe Gross and Chris Bootcheck were playing at Auburn in 2000, Peavy was off pitching for the Padres in the minor leagues. Looking back on the situation and where he is now, Peavy stands by his decision to bypass college.
"I certainly was excited to go to Auburn, but at the end of the day and for the betterment of my career, I thought getting some professional training from coaches was best for me."

Part III coming out tomorrow!
This story was approved by MLB Rumors.