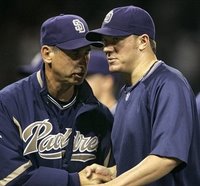 In the final installment of my exclusive interview with Jake Peavy, we talked about Kevin Towers and his time with the Padres. Little did we know that just a week after we talked, he would have to make a major career decision. I want to try out this new interview format for upcoming interviews, and I would appreciate it if you would leave a comment to let me know what you think of it.

Jake Peavy on Kevin Towers and the Padres front office

"I certainly have the utmost respect for Kevin [Towers]. He’s done a tremendous job through the years that I have been here. When the guys been given some money to spend – a competive payroll, so to speak – he’s put a very competitive team on the field. We’ve won a couple division titles since I have been here, competed down to the last days in ’04, ’05, and ’06. We played in a play-in game in ’07. With him mixing and matching talent and personality. It has been a great relationship."
Jake Peavy on his time with the Padres and what the future will look like

"I certainly understand that I need to bring an attitude and a certain type of leadership to this team. I’m the longest tenured guy with the Padres here. It is very weird for me to say because it feels like yesterday that I was one of the youngest players in the clubhouse. We are starting over here, we are rebuilding. We have a lot of young guys searching and we need to be showing hopefully how to go about your business the right way. I certainly try to do that along with David Eckstein and some other guys."