Share All sharing options for: Myers Done For Season 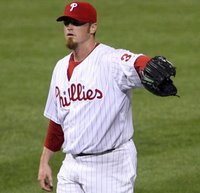 Phillies pitcher Brett Myers will have surgery to repair his right hip and will likely miss the remainder of the season. This is a big blow for the Phillies, whose rotation is already in shambles. The Phillies have been linked to some starters on the market, and that will likely increase as we move forward. The Phillies could make a move for Jake Peavy, but could also settle for someone less expensive like Doug Davis or Jarrod Washburn.

The Phillies could also look to add Mark Mulder or Pedro Martinez, whose prices have both reportedly dropped. If the Phillies view this season as a must-win, they could make a move. However, it may be smarter to ride this season out, develop your younger pitchers, and then make a move next offseason where prices are expected to be low again. Rich Harden, Joel Piniero, and Todd Wellemeyer are viable options for the Phillies in 2010.