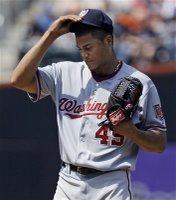 After starting the year 0-5 with a 5.85 ERA, the Nationals have designated Daniel Cabrera for assignment. Cabrera has a pretty good fastball, but cannot command his secondary pitches, which has lead to 35 walks to just 16 strike outs. Cabrera will be 28 tomorrow, and will likely find a job somewhere soon.

I would think the Cardinals would be a good landing spot. Pitching coach Dave Duncan is the best pitching coach in baseball, having success with several pitchers that were considered busts. Other spots for Cabrera include the Padres and Indians.