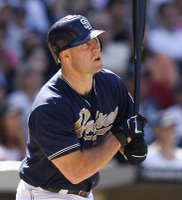 Gordon Wittenmyer of the Chicago Sun-Times says in a recent article that the Padres have expressed a willingness to move third baseman Kevin Kouzmanoff. Kouzmanoff would fill the void left by Aramis Ramirez, who will be out for six to eight weeks after separating his shoulder. Kouzmanoff is hitting .236 with 4 home runs in 42 games this season, and is a .260 career hitter.

Kouzmanoff shouldn't cost more than a pitching prospect or two, but I doubt the Cubs make a move for him. Even though the Cubs appear to be falling apart, it looks like they will ride this out and hope for a second half resurgence of Aramis Ramirez. Both Milton Bradley and Geovanny Soto have shown no signs of a turnaround, and Derek Lee is hitting just .248 with 5 home runs. It might be time to get Jake Peavy. It might be time to call up Jake Fox. If the Cubs do not turn things around this homestand, there should be some changes to the roster.