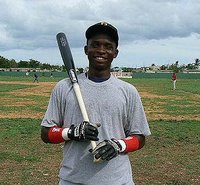 16-year old shortstop Miguel Angel Sano is the top international prospect in this years pool. The Pittsburgh-Post Gazette is reporting that the Pirates may have the inside track in signing Sano, who is 6'3'' and 189 pounds. Sano has also been coveted by the Cardinals, Cubs, Athletics, and Blue Jays, among others.
"The Pirates are one of many teams interested, and they've got as good a shot as any team as long as the money is there," Sano's agent, Rob Plummer, told the newspaper. "There's no question they're interested, just as there's no question this is a special talent."
Sano, who has been compared to Hanley Ramirez and Albert Pujols, is expected to land a bonus around 4 million dollars, which would be one of the highest bonuses ever given out. Sano is a long way from making it to the major leagues. He is just sixteen years old, and likely won't join the minor league system until the 2010 season. However, his body projects well and he could develop into a true hitter, hitting for both average and power.
Here is a video produced by the Global Post about Miguel Angel Sano. Check it out.