Share All sharing options for: Red Sox Could Trade Penny 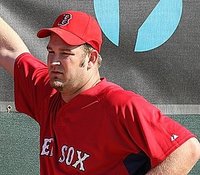 Buster Olney of ESPN.com speculates on his blog about the chances of the Red Sox trading Brad Penny, who is 3-1 in six starts. Penny owns a booming 6.96 ERA and has a strikeout-to-walk ratio of 16/15 - not all that spectacular. Penny pitched in the NL his whole career before making the jump to the AL. He is probably in the toughest division in baseball hitting wise, which also happened to open another hitters ballpark this year.

Olney suggests the Brewers or Mets as possible landing spots if made available. I think it would be a smart move to unload him. Masterson will move back to the bullpen when Matsuzaka returns, Buchholz and Bowden are both pitching very well in Triple-A, and John Smoltz will be coming back in the next month or so. Trading Penny midseason is risky, but taking a chance on Buchholz or Bowden in the five spot is worth the risk.